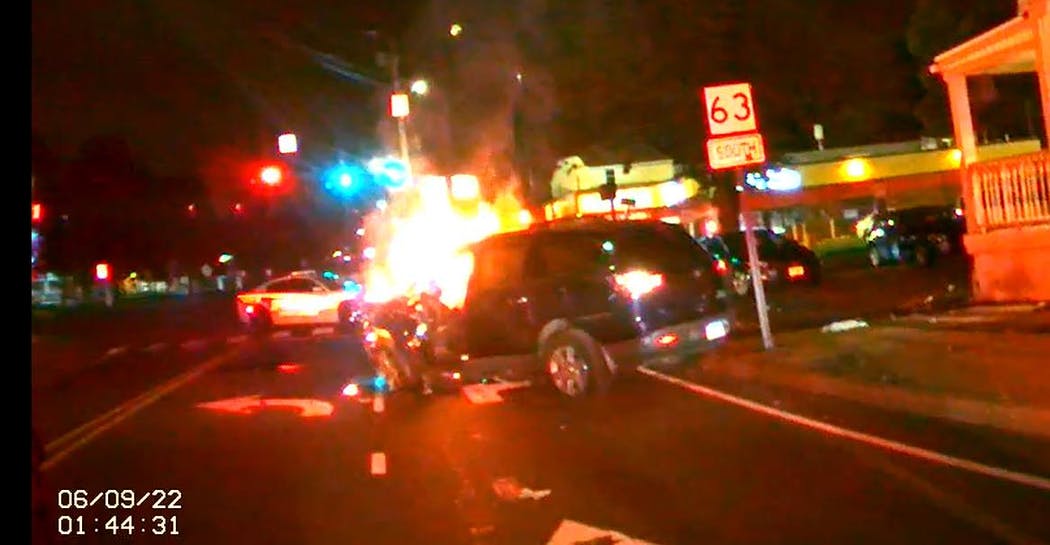 While on a routine patrol, a Woodbridge police officer rescued a seriously injured driver just moments before his car became fully engulfed in flames after a crash in New Haven.

A Woodbridge police officer who was on routine patrol was able to pull a man from a crashed car just before it burst into flames, police said.

Officer Matthew Lima of the Woodbridge Police Department was on routine patrol in the lower Amity Road area of that town at about 1:40 a.m. Thursday when he heard a vehicle skidding, and “a loud crash,” police said.

Lima located “a motor vehicle accident on Amity Road near Fowler Street in New Haven and was promptly able to remove the seriously injured driver from the car just prior to the vehicle becoming fully engulfed in flames,” Police Chief Frank P. Cappiello said.

“It is only because of Officer Lima’s alertness and swift actions that the operator’s injuries were not far worse” and he praised the officer for his professionalism during this incident,” Cappiello said.

Cappiello said the driver, a 26-year-old male from Bridgeport, was taken from the scene by American Medical Response ambulance to Yale New Haven Hospital where he is being treated for life-threatening injuries.

The New Haven Fire Department responded to extinguish the vehicle fire, and the accident investigation is being conducted by the New Haven Police Department’s Crash Team, Cappiello said.