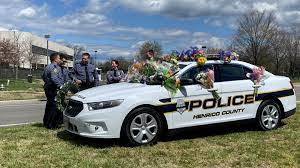 Henrico County Police Officer Trey Marshall Sutton was driving his field training officer and a person in custody in a patrol car when a truck drove into an intersection and collided with the cruiser.

A rookie Virginia police officer died Thursday after a crash with a truck that also critically injured another officer and a person in police custody.

The incident happened at around 8:30 p.m. Wednesday as Henrico County Police Officer Trey Marshall Sutton was driving his partner and person in custody, WTVR-TV reports. That’s when a truck entered an intersection and collided with the patrol car.

The people in the police cruiser and a fourth person were taken to the hospital. Sutton’s death was announced by the department Thursday morning.

The other police officer was in critical condition with injuries that were possibly life-threatening. He was Sutton’s training officer and has been with the department since 2014.

The person in custody also was taken to the hospital in critical condition with injuries that were possibly life-threatening. The fourth person was treated at the hospital and released.

“This is a tragedy for everyone, and my thoughts and prayers are with everyone involved,” Henrico Police Chief Eric English said. “God bless Officer Sutton for his chosen profession – law enforcement and commitment to Henrico County. Sutton was a well-respected member of his recent academy class.”

Sutton, 24, was hired in June and had just graduated from the basic police academy in February, according to the department. He was assigned to the Patrol Bureau, where he was in field training.

The crash is under investigation.