‘We Had a Hero Die’: Texas Deputy Constable Killed in Fiery Crash 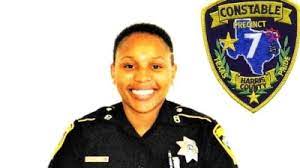 Jennifer Chavis, a deputy with the Harris County Constable Precinct 7 Office, was sitting in her cruiser when it was struck from behind by a suspected drunk driver and burst into flames.

Editor’s note: Jennifer Chavis, a deputy with the Harris County Constable Precinct 7 Office, has been identified as the victim in the crash.

A suspected drunk driver hit and killed a Texas deputy after driving away from the scene of a separate crash in Houston, authorities said.

Witnesses called 911 Saturday evening, April 2, to report a crash involving a “possible intoxicated driver that fled the scene of a crash” on the Sam Houston Tollway, Harris County Sheriff Ed Gonzalez said in a tweet.

Responding to the call, a deputy pulled off to the side of the tollway and waited for the driver to pass by, Gonzalez said.

As the deputy sat parked, Serrano slammed into the back of her SUV, which burst into flames. Her SUV was also “shoved a large distance” by the impact, HCSO Capt. Anthony McConnell said at a news briefing.

“Tonight, we had a hero die,” McConnell added.

The deputy “did not emerge from the vehicle” and she was pronounced dead at the scene, according to Gonzalez.

“She died trying to protect the community,” he said.

After crashing into the deputy, Serrano apparently tried to flee for a second time but was stopped by witnesses.

“Grateful for the Good Samaritans that stopped to assist and kept the suspect from fleeing,” Gonzalez said.

Serrano has been charged with intoxication manslaughter of a peace officer.