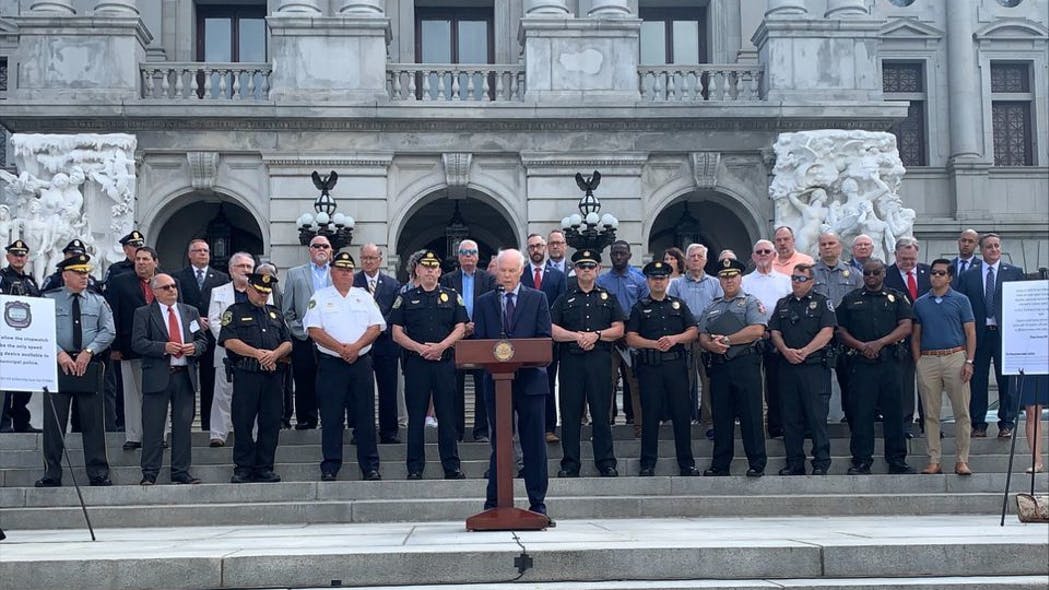 Supporters of a bill that would allow local police to use radar guns to enforce speed limits are encouraging Pennsylvania residents to contact lawmakers to vote and pass the legislation.

Municipal police are the closest they have ever been to gaining the authority to use radar guns to enforce speed limits.

With that goal in reach that would put Pennsylvania in the company of the 49 other states that already allow this, a coalition of law enforcement and municipal organizations is making a full-court press to bring it to fruition.

Some three dozen representatives from the Pennsylvania Radar Coalition stood on the Capitol steps Thursday pleading with the public to contact their lawmakers to move a bill allowing for local use of this speed detection device out of the House Appropriations Committee so that it can be voted on by the full House. The bill has sat idle in committee for the last 15 months.

Similar legislation has passed the Senate twice before, most recently in 2021. Both times it drew overwhelming bipartisan support in that chamber. That gives the coalition confidence to say House passage of the bill is the only thing standing in the way of reaching the governor’s desk.

Gov. Tom Wolf’s spokesman Beth Rementer said, “the governor supports allowing for local law enforcement to use radar guns and will continue to monitor the bill as it moves through the legislature.”

Jason Gottesman, a spokesman for the majority House Republican Caucus, explained the reason the bill has been stuck in the appropriations committee. He said, “The bill drew a lot of questions from the caucus as it was moving through the process, so we want to be sure any remaining concerns are addressed before it moves forward.”

Elizabethtown Mayor Chuck Mummert, speaking as a representative for the Pennsylvania State Association of Boroughs, one of eight statewide organizations that comprise the RADAR coalition, said, “Our communities need action from Harrisburg.”

He added: “It’s time to give our local police the tools they need to effectively enforce the speed limits and save lives.”

The legislation, sponsored by Rep. Greg Rothman, R- Cumberland County, addresses a variety of concerns that have stopped past efforts to give local police this tool.

For example, it limits the amount of money a municipality can keep from speeding tickets to no more than 10% of its municipal budget. Any revenue that exceeds that level would flow to the state’s Motor License Fund. It would require a municipality to pass an ordinance allowing radar’s use before it could be used.

Motorists could only be cited if they are traveling at least 10 mph over the posted speed limit on roadways with speed limits under 55 mph and at least 6 mph on roadways with a higher speed limit. Among other criteria, the bill would require a municipality that authorizes radar’s use to post at least four signs within 500 feet of its borders to alert motorists.

Rothman said, “I don’t want to punish speeders. I want to stop speeding.”

Coalition members presented statistics they say illustrate an alarming trend when it comes to speeders. According to recently released statistics from the National Highway Traffic Safety Administration, 441, or more than four in 10 of all traffic fatalities in 2020 were speeding-related.

While that typically should be a cause for concern, Mummert said consider that occurred in a year when the COVID-19 pandemic led to fewer vehicles on the roadway.

“For many years, we’ve heard a common refrain associated with local use of radar that local governments will use it as a revenue generation tool. Bull,” said Wilkes-Barre Township councilman John Jablowski, representing the statewide township commissioners association. “This is not a revenue generation tool. This is a life-saving tool. This criticism is inaccurate. It is unfounded and it’s time to stop using that as an excuse.”

“Speed kills and radar is an important tool to help slow drivers down,” Krol said.

Without the authority to use radar, Peters Township Police Chief Douglas Grimes, president of the Western Pennsylvania Chiefs of Police Association, said they are forced to use stopwatches and what he called “glorified stopwatches” with VASCAR and ENRADD, an electronic non-radar device, to time a vehicle’s speed between two fixed points.

Grimes, a retired state police trooper, said he can attest to the increased efficiency and effectiveness of using radar over the stopwatch devices his township officers are forced to use. He added he drove halfway across the state to participate in the lobbying effort for local use of radar, saying ‘that’s how important this is.”

Jim Nowalk, president of the Pennsylvania State Mayors Association, said the coalition has resisted past efforts to limit the legislation to only certain types of municipalities in an effort to overcome legislative resistance.

“We said we would not leave one municipality behind, one police chief behind. There’s absolutely no reason why anybody has to be left behind,” Nowalk said.

With Rothman’s bill giving all municipalities the option to pass an ordinance to allow radar’s use for speed enforcement, Nowalk said that’s why the bill has gotten as far as it has although Rothman said that is also contributing to the bill being stalled in committee.

The bill has continued opposition from the National Motorists Association, a grassroots organization dedicated to the preservation of drivers’ rights. Tom McCarey, a member of the association, said motorists are considered “speeders” because speed limits are set below “the safest speeds that 85% of drivers travel.”