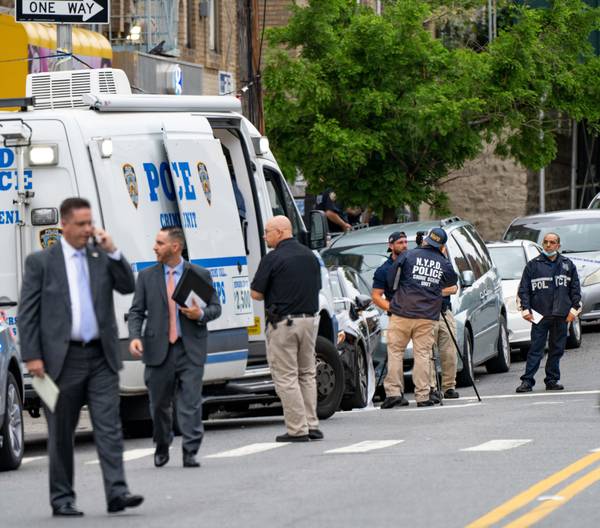 The officers, who had begun administering aid to the first gunman, found themselves again under fire

NEW YORK — As a man lay dying on a Bronx street from a shootout with police, his father snatched the gun from his dying son’s hands — and used it to continue the gun battle with cops, authorities said.

Two off-duty cops spotted the 24-year-old son shooting at a man on Valentine Ave. near 180th St. in the West Bronx just after 4 a.m., police said.

The father and son had been in an argument with a group of people on the corner when it turned physical and the son pulled out the gun, cops said.

The cops, who were in plainclothes after finishing their work day, identified themselves and told the shooter to drop his gun but the gunman instead pointed it at them and began unloading, officials said. Nobody was struck.

The police officers returned fire and fatally struck the gunman once in the chest, cops said.

Uniformed officers from the 46th Precinct stationhouse a block away swarmed the area after they heard the shots.

“Immediately after shooting, the officers began rendering aid to the 24-year-old male,” NYPD Chief of Patrol, Juanita Holmes said at a press conference.

In a wild turn of events, the gunman’s 45-year-old father picked up the firearm from his dying son’s hand and began firing at cops but nobody was struck, police said. Police returned fire but the dad was not hit.

The father passed the gun to a nearby woman and tried to get away but cops quickly arrested him.

Surveillance video shows the father walking around the block, weaving between cars, then returning to the scene in hopes cops didn’t recognize him, sources said.

EMS rushed the son to St. Barnabas Hospital but he could not be saved.

Both officers were taken to Jacobi Medical Center for ringing in the ears, cops said.

The woman with the gun ran away as well as the shooter’s intended target.

Charges for the father were pending, police said.