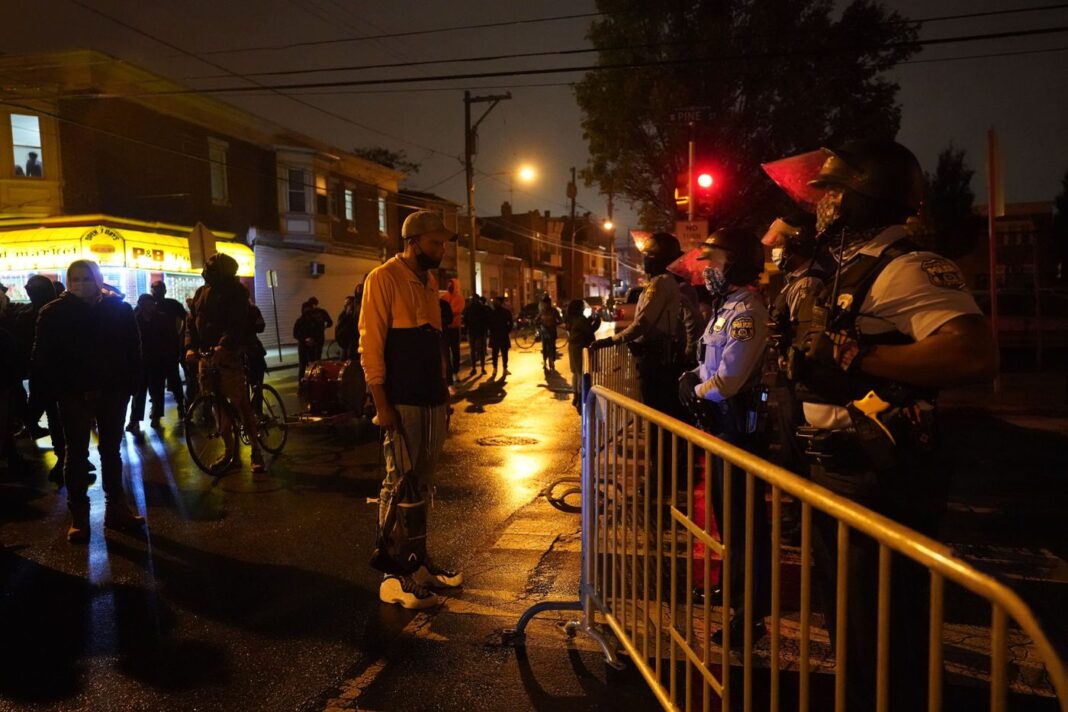 The shooting was caught by multiple cameras and shows Wallace charging officers yielding a knife swinging it aggressively at the police.

Police officers fatally shot a 27-year-old Black man armed with a knife during a confrontation Monday afternoon in West Philadelphia, an incident that quickly raised tensions in the neighborhood and sparked a standoff that lasted deep into the night.

Late Monday into early Tuesday, police struggled to respond to vandalism and looting along the commercial corridor of 52nd Street, an area that was the scene of clashes between police and protestors earlier this summer. At least one police vehicle was set on fire Monday night and destroyed.

By morning, an officer was hospitalized in stable condition with a broken leg after being struck by a pickup truck, police said. About 29 other officers suffered mostly minor injuries from being struck by rocks, bricks, and other projectiles, police said in a preliminary report.

Authorities detained 10 people overnight near 55th and Pine Street, police said, and those people were set to be released pending possible charges of assaulting police or rioting. Police said officers arrested about 20 people in relation to looting at various stores in West Philadelphia, University City, Overbrook Park, and Center City, some of which were not near the protest.

Hours earlier, shortly before 4 p.m., police said, two officers responded to the 6100 block of Locust Street after a report of a man with a knife. Family members identified him as Walter Wallace Jr.

A video posted on social media showed Wallace walking toward the officers and police backing away. The video swings briefly out of view at the moment the gunfire erupts but he appeared to be multiple feet from them when they fired numerous shots.

Police spokesperson Sgt. Eric Gripp said the officers had ordered Wallace to drop the weapon, and he “advanced towards the officers.” Gripp said investigators are reviewing footage of what happened. Both officers were wearing body cameras.

He said both officers fired “several times.” After the man was shot, he fell to the ground, and Gripp said one of the officers drove him to Penn Presbyterian Medical Center, where he died.

Walter Wallace Sr., the man’s father, said his son appeared to have been shot 10 times.

“Why didn’t they use a Taser?” the senior Wallace asked outside a family residence on the block. “His mother was trying to defuse the situation.”

He said his son struggled with mental health issues and was on medication. “He has mental issues,” Wallace said. “Why you have to gun him down?”

One witness, Maurice Holloway, said he was on the street talking to his aunt when he saw police arrive. Wallace had a knife and was standing on the porch of his home, Holloway said, and officers immediately drew their guns.

Wallace’s mother chased after him as he walked down the steps of his porch, still holding the knife, according to Holloway. His mother tried to shield Wallace and tell police he was her son.

Wallace brushed off his mother and walked behind a car before emerging again, Holloway said.

“He turns and then you hear the shots,” Holloway said. “They were too far from him; it was so many shots.”

Gripp said it was unclear how many times the man was shot or where he was struck. The officers fired possibly a dozen or more times, according to an account by witnesses and family members. Police marked the crime scene with at least 13 evidence markers.

Both officers, who were not publicly identified, were taken off street duty pending an investigation.

Police Commissioner Danielle Outlaw arrived at the scene shortly after the incident as a crowd of neighbors yelled at police and questioned the use of force. By 6:30 p.m. police reopened the street and the crowd had largely dispersed.

But dozens of protesters then gathered at Malcolm X Park at 51st and Pine Streets, chanting “Black Lives Matter.” They marched to the police station at 55th and Pine Streets as they chanted, “Say his name: Walter Wallace.”

For hours, protesters confronted officers who stood in a line with riot shields behind metal barricades at the station. People in the crowd could be seen throwing objects at the officers. A group also marched into University City, at least one TV news vehicle was vandalized, and police reported that windows had been broken on Chestnut Street.

Between 100 and 200 people then moved to the 52nd Street commercial district and caused considerable property damage from Market to Spruce Streets. Shortly before 1 a.m., a speeding black truck ran over an officer at 52nd and Walnut Street. The incident was captured on an Instagram livestream. The condition of the officer was not immediately known.

The 52nd Street corridor was the scene of unrest on May 31 and early June as nationwide protests erupted over the police killing of George Floyd in Minneapolis. Protesters clashed with Philadelphia officers and set police vehicles on fire; police responded with rubber bullets and tear gas on residential streets. Since then, the police department has forbidden the use of tear gas.

At times Monday, the scene threatened to repeat. Just before midnight, someone set fire to a police vehicle on the street. Ultimately, more officers in riot gear arrived and flooded the neighborhood, dispersing the crowd.

Mayor Jim Kenney, in a statement Monday night, pledged a full investigation into the shooting that sparked the night. “My prayers are with the family and friends of Walter Wallace,” he said. “I have watched the video of this tragic incident and it presents difficult questions that must be answered. I spoke tonight with Mr. Wallace’s family, and will continue to reach out to hear their concerns firsthand, and to answer their questions to the extent that I am able.”

Outlaw, too, said the department would conduct an inquiry. “Residents have my assurance that those questions will be fully addressed by the investigation,” she said. “While at the scene this evening, I heard and felt the anger of the community. Everyone involved will forever be impacted. I will be leaning on what the investigation gleans to answer the many unanswered questions that exist. I also plan to join the Mayor in meeting with members of the community and members of Mr. Wallace’s family to hear their concerns as soon as it can be scheduled.”

Arnett Woodall, a community organizer who lives a few blocks away, came to the scene shortly after the incident. He said he immediately saw how many evidence markers were in the street and felt it was “a textbook example of excessive force.”

He said the incident shows why police must implement stronger community policing protocols and why the city should invest in town watch programs.

“The city of Philadelphia can do better,” he said.

District Attorney Larry Krasner said in a statement Monday evening: “The Philadelphia District Attorney’s Office takes its obligation to try to be fair and to seek evenhanded justice seriously. The DAO Special Investigations Unit responded to today’s fatal shooting of a civilian by police shortly after it occurred, and has been on scene with other DAO personnel since that time investigating.”

Krasner encouraged witnesses or others with information to contact the District Attorney’s Office.

”In the hours and days following this shooting, we ask Philadelphians to come together to uphold people’s freedom to express themselves peacefully and to reject violence of any kind,” he said.

John McNesby, president of the Fraternal Order of Police Lodge 5, said in a statement: “Our police officers are being vilified this evening for doing their job and keeping the community safe, after being confronted by a man with a knife. We support and defend these officers, as they too are traumatized by being involved in a fatal shooting.

“We ask the public for its patience as investigators work to gather all the facts of this tragic incident in West Philadelphia today.”