2 officers ambushed in New Orleans, one shot in face by man in pedicab 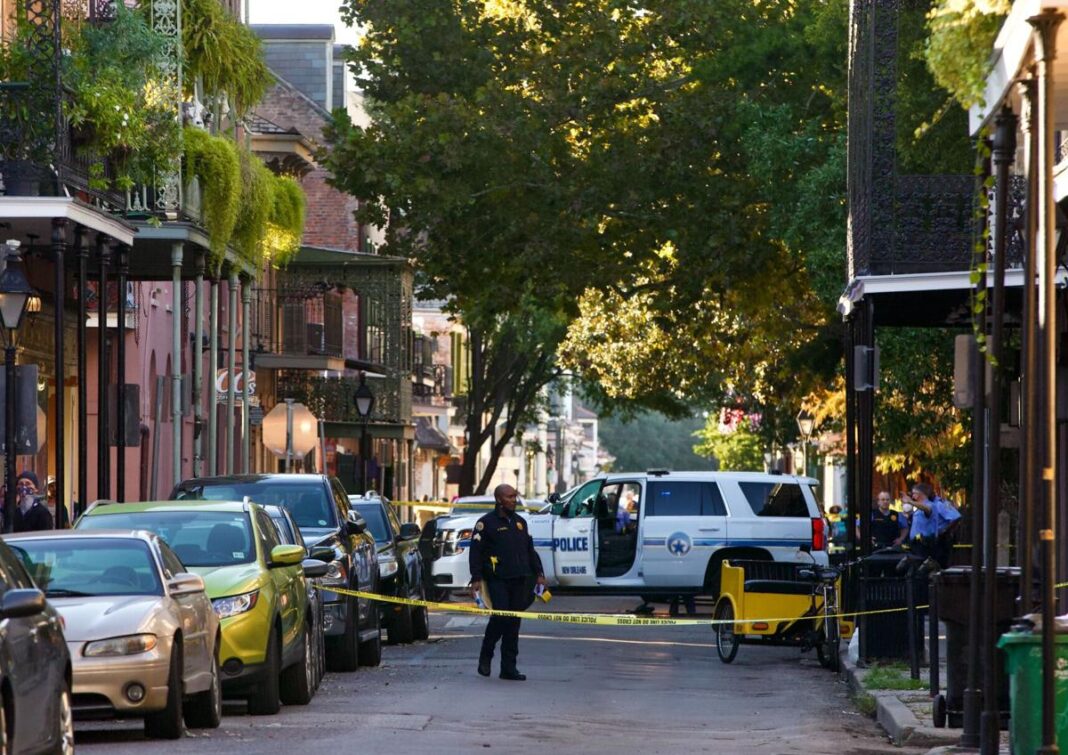 The officers were in an SUV when the pedicab approached

The officer was wounded at about 4:25 p.m. while in his patrol vehicle near St. Philip and Royal streets. Other officers took him to a hospital rather than wait for paramedics, and police arrested the alleged gunman within minutes, Police Superintendent Shaun Ferguson said.

Ferguson said the officer was in serious but stable condition after being shot under his left eye. The bullet was lodged in the officer’s skull, but the four-year veteran, whose name was not immediately released, was responsive as he walked into the hospital holding his cheek, Ferguson said.

A second officer, a 16-year veteran, was wounded by glass shards in the shooting, from a shattered window on the cruiser.

“Two of our officers were ambushed,” said Ferguson, who said officers confiscated a gun that they think was used in the shooting. “This is a dark day.”

Ferguson said the suspect, who had a gun holster on him, appeared to be experiencing some type of medical episode when he was captured. He said the man was taken to a hospital for evaluation, and he made clear that the arresting officers did not use any physical force on the suspect.

“I want to commend those officers for maintaining professionalism,” Ferguson said.

Ferguson did not identify the suspect or specify what charges he would face.

Several eyewitnesses said two officers were in an SUV on Royal Street crossing St. Philip when a pedicab riverbound on St. Philip approached. A man in the back of the pedicab stood up and fired at least five shots into the driver’s side door of the police vehicle, they said. The shooter ran off as the pedicab crashed.

Gabriel Shaffer, an artist who owns a gallery on that block of Royal, said he heard the wounded officer get out of the vehicle while moaning and exclaiming in pain.

“I could clearly hear him say, ‘Oh, my God, somebody just took my life!'” Shaffer said. “It was pretty awful.”

Tour guides Angie Still and Karen Fernandez said they were just a few yards away when the shooting erupted. They saw an officer on the passenger side of the targeted police vehicle jump out and scream, “Officer down!” Neither officer from the vehicle appeared to have time to return fire.

“We were just sitting there in shock,” Still said.

Douglas Mackar, who was in a building overlooking the scene of the shooting, said he heard the gunshots and ran to the window. He said he saw the driver of the pedicab crash into the sidewalk and run for cover.

Mackar said he ran from the window to check on his girlfriend, and by the time he returned, the wounded officer had already been whisked away to the hospital. “Whoever was first on the scene got him loaded up and out of here within seconds,” Mackar said.

A woman who asked that her name not be published said she saw the suspected shooter flailing, screaming and trying to bite first responders who were loading him into an ambulance after his arrest.

At the wig shop Fifi Mahoney’s, employees grabbed a few passerby from the street and locked them inside along with six customers. One customer, a doctor, left and dashed to the shooting scene to help, returning later with bloodied hands to take his wife home, an employee said.

Ferguson said passersby helped officers find the gunman by pointing him out as he ran to the intersection of St. Peter and Decatur streets. A retired Army veteran performed first aid on the officer’s face wound before he was taken to the hospital, Ferguson said.

The police chief thanked those members of the public for each of those actions, which came amid a party atmosphere that is typical in the French Quarter on a Friday evening.

Donovan Livaccari of the local Fraternal Order of Police lodge called the shooting was a sobering reminder of the dangers inherent to professional law enforcement.

“Merely driving down the street … can lead to gunfire,” he said. “These two officers were not responding to a call for service. They were not looking for an armed subject on a pedicab. They were driving around in the French Quarter on routine patrol.”

“If the city can’t even keep the police safe, how can we feel safe?” wondered a worried Kim Planche Hunter, who has lived in the French Quarter resident for 70 years.

Ferguson said the attack marked a particularly grueling hour in what has been a difficult year for both his agency and the city. Not only has New Orleans been gripped by the deadly coronavirus pandemic since March, it also took a direct hit two days earlier from Hurricane Zeta, a strong Category 2 storm that caused widespread damage and left tens of thousands without electricity even two days later.

“We’ll get through this together,” Ferguson said.

Katelyn Umholtz contributed to this report.