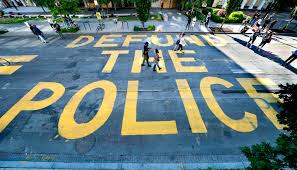 The movement to defund the police, which has been pushed by both Democraticlawmakers and members of the media, has been devastating to police departments across the country, hurting recruitment and retention and hindering response times, according to Dr. Darrin Porcher, a veteran of the New York City police department.

Porcher said media coverage of law enforcement gives a perception that skews to the left, creating a negative perception of police that is dangerous for the public and makes them reluctant to do their jobs.

“I’m in wholehearted agreement that if an officer’s doing something wrong, by all means, that officer needs to be held accountable,” he said. “But we’re just finding far too many instances where officers are really doing what they’re paid to do and they’re being scrutinized, and this is something that’s being amplified by left-wing media outlets.”

Porcher said that this drumbeat of negative police coverage is not because it is a popular American sentiment, but rather, it stems from a vocal minority.

“I use the analogy the squeaky wheel gets fixed first,” he said. Although the gross majority of people did not want police defunded, the loud voices in the room were beating the drum to defund the police.”

Beyond parroting the need to defund the police, Porcher said policy changes, such as removing qualified immunity in New York City, have resulted in police officers’ actions being questioned more often and offers to leave the profession.

“The attrition rate is going through the roof and they’re having a very difficult time acquiring new officers,” he said. “And what it’s resulting in is the public experiencing greater response times because they don’t have the personnel that they had in the past.”

It’s not just a problem that is plaguing major metropolitan areas. Idaho sheriff Kieran Donahue says the negative rhetoric surrounding police has had a direct effect on his department, particularly when it comes to staffing and recruiting.

AS DEFUND THE POLICE MOVEMENT TRICKLES DOWN FROM BIG CITIES, SMALL-TOWN AMERICA PAYS THE PRICE

Canyon County, Donahue said, is roughly 674 square miles. A fully-staffed team would include eight or nine officers at any given time. Now, though, there are on average five officers on a shift, and the department is looking at cutting that down to four officers on some shifts.

“What that means, our response times are slower, calls get stacked up, priority calls are what we’re going to concentrate on,” he said. “That leaves an awful lot of calls out there that citizens are asking for that we simply are not going to be able to get to in a timely situation.”

Donahue said his department is actively working to recruit new officers and bring them to Canyon County from other departments, but that is not enough.

Officers need to see law enforcement being supported by lawmakers and district attorneys, he said.

“We have to see our state legislators, our governors, and our community leaders such as city councils and boards of county commissioners take that step out into the light and say, ‘we will and we are going to support our law enforcement community,’” he said.

Donahue called on lawmakers across the country to stop the flow of negative rhetoric toward law enforcement.

“They need to stop getting on these bandwagons for their own political agenda, and do what they also took an oath for,” he said. “Because we’re all in this together. We’re after peace and prosperity and public safety. The foundation of every government entity is public safety. It has to be. Without it, there’s nothing. We have chaos.”