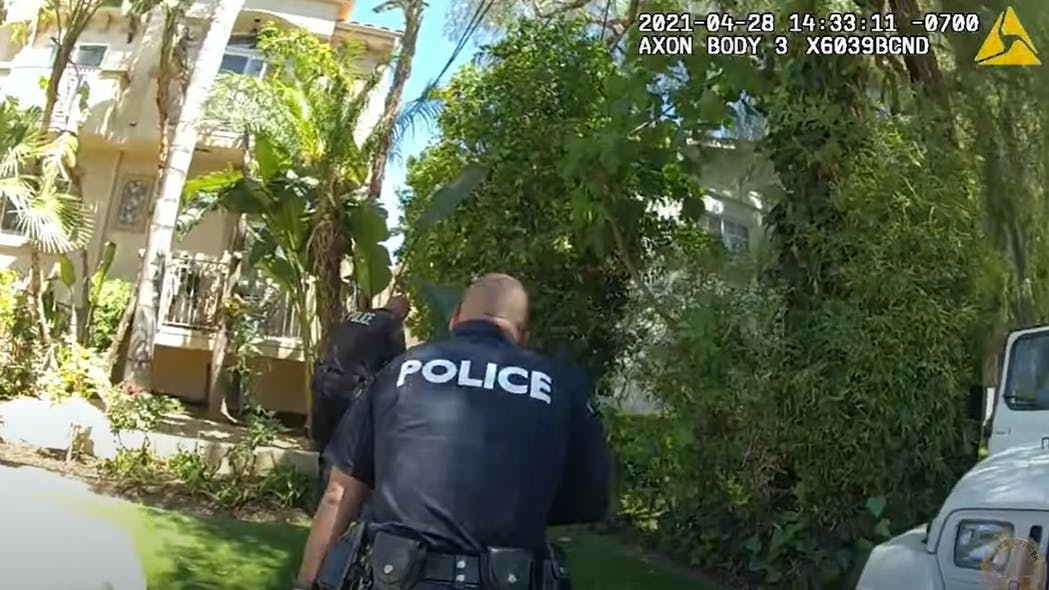 A report from LAPD’s chief describes the violent confrontation between an off-duty officer and a burglar in his townhouse’s garage that left the officer and the suspect shot multiple times.

As off-duty Los Angeles Police Department Officer Michael Beyda wrestled with the burglar who had just shot him multiple times, a terrifying thought passed through his head.

“This is what death feels like,” Beyda recalled thinking in an interview with investigators.

Beyda’s account of the shooting in Sherman Oaks last April was outlined for the first time publicly Tuesday in a report from LAPD Chief Michel Moore to the Los Angeles Police Commission. In the report, Moore concluded Beyda’s decision to fire his gun and his other actions during the confrontation were reasonable given the threats posed by the assailant, Christopher Camarena.

While he was off-duty, Beyda came upon Camarena, who had a history as a burglar, in his town house’s garage. Camarena was wearing a ballistic vest that belonged to the officer and was holding one of his guns, both of which he had found in the officer’s car, according to the report.

After Beyda drew his service weapon and identified himself as a police officer, Camarena opened fire, hitting Beyda in the chest, according to the report. The officer fired back and then fled the garage. He collapsed on a walkway near his complex’s pool, the report said.

Camarena chased Beyda and kept firing, and Beyda fired back until Camarena collided into him, according to the report. The two men grappled with each other for control of the officer’s two guns.

“I’m pushing his arms away and he’s on top of me,” Beyda told investigators. “I ultimately end up still struggling with him. I take my pistol and I hit him, I believe, twice on the top of the head in an effort to create some distance and get up and get out of there, because I had no more rounds left and he was still in possession of the [other] firearm.”

According to the report, after Beyda struck Camarena with the butt of his gun, the officer managed to stand. While “choking on his own blood,” he walked back to the garage and told his girlfriend to call 9-1-1, the report said.

“Off-duty officer shot three times,” Beyda could be heard saying in the background of the call, according to the report.

Beyda was shot twice in the chest and once in the leg, according to the report. Camarena was shot three times — in the shoulder, wrist and leg. Officers responding to the call found Camarena lying in a narrow walkway between a nearby building and a fence, where he was taken into custody.

Camarena allegedly told investigators that he was homeless and in the garage because he wanted to wash himself, but his account of the altercation was not included in the report, and he could not be reached for comment Tuesday.

Prosecutors charged Camarena with attempted murder in the incident, for which he has pleaded not guilty. A preliminary hearing in the case is scheduled for next month.

Moore’s report left unresolved one aspect of Beyda’s actions: his decision to leave a firearm unattended in his car before Camarena allegedly entered the garage and found it.

Beyda told investigators that he had been loading his car up for work and had left the items in his vehicle for a matter of minutes before returning to find Camarena in the garage.

The report said that Beyda’s decision to leave the gun unattended is the subject of a separate personnel complaint. Moore said Tuesday that that complaint has yet to be adjudicated, but would be now that the commission has ruled on the shooting.