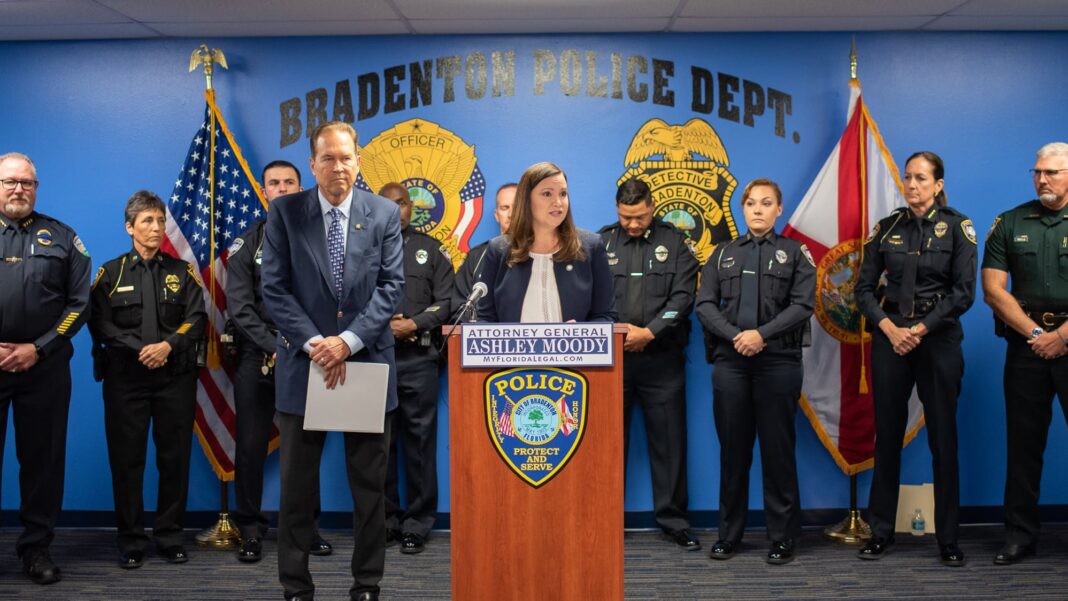 The federal Thin Blue Line Act would let juries consider any murder or attempted murder of a police officer or other first responder as an ‘aggravating factor’ in death penalty considerations.

BRADENTON, FL— With support from Florida Attorney General Ashley Moody, U.S. Rep. Vern Buchanan is hoping to push his proposed legislation, which ups the penalties against cop killers, across the finish line.

Buchanan, R- Longboat Key, first introduced the Thin Blue Line Act in 2017, but it has never been signed into law. In a joint press conference Monday morning at the Police Department, Moody announced that the bill has her full support.

“We will protect those that have signed up for these dangerous jobs to protect us. We will not tolerate the rise of lawlessness against our police officers,” Moody said.

The Thin Blue Line bill would allow juries to consider any murder or attempted murder of a police officer, firefighter or other first-responders as an “aggravating factor” in death penalty considerations. The rule already applies to federal law enforcement officers who are killed in the line of duty.

The U.S. House of Representatives previously voted in support of the Thin Blue Line Act in 2017. Buchanan said he’s hopeful that the House will vote to pass it again and get the bill to the U.S. Senate, which also needs to vote on the bill before it heads to President Joe Biden’s desk.

According to Cornell Law School’s Legal Information Institute, an “aggravating factor” applies to the facts around the case that could increase the severity of the punishment issued for committing a crime.

In a press release, Buchanan’s office noted that the Thin Blue Line Act’s increased penalties would only apply to cases that involve federal jurisdiction, such as police killings that take place on federally owned land or while serving on a joint task force.

“Law enforcement, frankly, is under attack,” said Buchanan, who is up for re-election in 2022. “It makes me sick to see these sick individuals target law enforcement personnel and first-responders. They need to know they face severe consequences for targeting men and women in uniform.”

Monday’s press conference comes after a deadly attack on a law enforcement officer Friday in Florida. Officials are still searching for a 35-year-old man who allegedly killed a Nassau County Sheriff’s Office deputy, shooting him in the face and the back during a traffic stop in Callahan, just north of Jacksonville.

“It doesn’t take a strong leap to see that the rise in anti-police rhetoric across our nation has caused an increase in attacks on law enforcement,” Moody said.

According to the Officer Down Memorial Page, a website that keeps track of law enforcement officers who die in the line of duty, 44 officers have been killed by gunfire in 2021. That’s a 13% increase over last year, the website said.

Bradenton Police Chief Melanie Bevan and Manatee County Sheriff Rick Wells both praised Buchanan and Moody’s efforts to protect law enforcement officers. Neither agency has lost an officer in the line of duty in more than 30 years.

“Congressman, your introduction of the thin blue line act clearly displays your dedication and resolve to support our first-responders and their families,” Bevan said. “Likewise, you and Attorney General Moody have incredible support from the law enforcement community, evident by the number of personnel here today.”

“I want to thank Congressman Buchanan and Attorney General Moody for all they’ve done throughout the years to keep us safe,” Wells added. “We continue to train harder and to help these young men and women that choose law enforcement as a career. We stay focused on officer safety.

“I’ll be honest with you — I never had to worry about sitting in a restaurant, eating my dinner and worrying about someone attacking me,” he continued. “You have to worry about that now. Your head has to be on a swivel every second of the day when you are out here serving and protecting.”