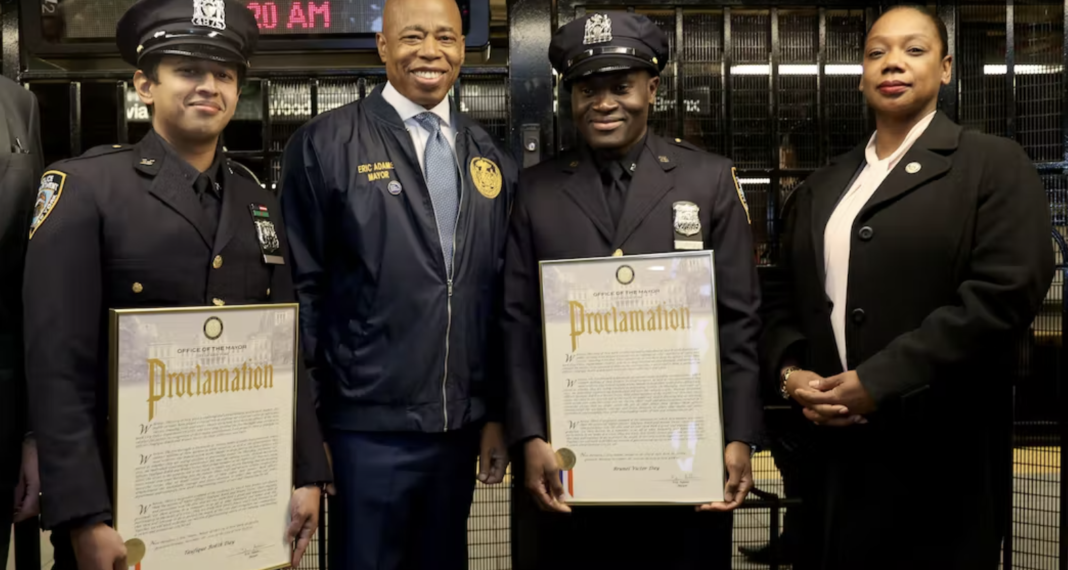 Two NYPD officers saving a homeless man who fell on subway tracks is an example of the success of a new public safety initiative that adds more police overtime shifts in the subway system.

Two NYPD officers who saved a homeless man after he fell onto the subway tracks in Harlem over the weekend were on the clock thanks to the police department’s “omnipresence” initiative in the transit system, Mayor Adams said Monday.

Speaking at the 116th Street station where the rescue took place Thanksgiving Day, Adams told reporters that the officers, Taufique Bokth and Brunel Victor, were on a four-hour overtime shift when they spotted the unidentified man falling onto the tracks from the opposite platform.

“They jumped to the rescue, even risking their own lives,” said Adams, who was joined by the two officers, NYPD Commissioner Keechant Sewell and other transit and police officials.

The man, who tumbled to the tracks after suffering a dizzy spell, was swept up from the tracks by the officers with help from an unidentified good Samaritan mere seconds before a train barreled into the station, officials said. He was taken to a hospital and has made a full recovery, Adams said.

The mayor said the rescue is a testament to the success of a public safety initiative he and Gov. Hochul rolled out in October that green-lit 1,200 additional overtime shifts in the subway system every day.

“The blue surge in the subway system is working,” Adams said, noting that Bokth and Victor’s OT shifts were bankrolled by the new underground public safety effort.

The beefed up cop presence in the subway, which Adams has described as key to his “omnipresence policing” strategy, comes amid heightened concern about safety in the system due to a recent string of random attacks underground.

Despite such acts of violence, crime overall in the subway system is trending in the right direction, according to NYPD data. Major felonies in the system are down 13% over the last 28 days, and down 5.4% as compared to 2017, the data show.

Adams’ defense of the cop surge in the subways also comes as he’s facing heat for failing to make good on a campaign promise to reel in the NYPD’s bloated overtime budget.

On the mayoral campaign trail last year, Adams promised to slash the NYPD overtime budget in half if elected.

Nonetheless, State Comptroller Thomas DiNapoli found this summer that the NYPD spent a nearly record-breaking $762 million on overtime in the last fiscal year, half of which Adams was in office for.

At the same time, Adams’ spending modification plan released last week showed NYPD did not achieve the budget savings he set for all city agencies earlier this year.

“This man wants to defund everything except the cops,” progressive Democratic Brooklyn state Sen. Jabari Brisport said during a recent anti- Adams budget rally on the City Hall steps.

On the other side of the equation, Pat Lynch, president of the Police Benevolent Association, used the example of Bokth and Victor to push for better pay for his members.

“Like all New York City police officers, they are overworked and underpaid,” the NYPD union boss said Monday. “They deserve a competitive salary that will reverse the current NYPD staffing emergency. Press conferences and mayoral proclamations will not stop cops from quitting in droves. If our city doesn’t immediately fix our low pay and brutal work schedule, there may not be a hero police officer available to help the next time a New Yorker is in distress in the subway.”

Though some crime categories, including robberies, have increased in recent months, shootings and murders are down citywide, according to NYPD statistics.

Nonetheless, Adams contended last week that now is not the time to shave the NYPD budget or address police overtime spending because there’s “a crime surge that we must address.”

At Monday’s press conference, Adams took credit for the dip in shootings and homicides.

“We’re on the right train, we’re moving in the right direction,” he said. “We’re going southbound on crime.”