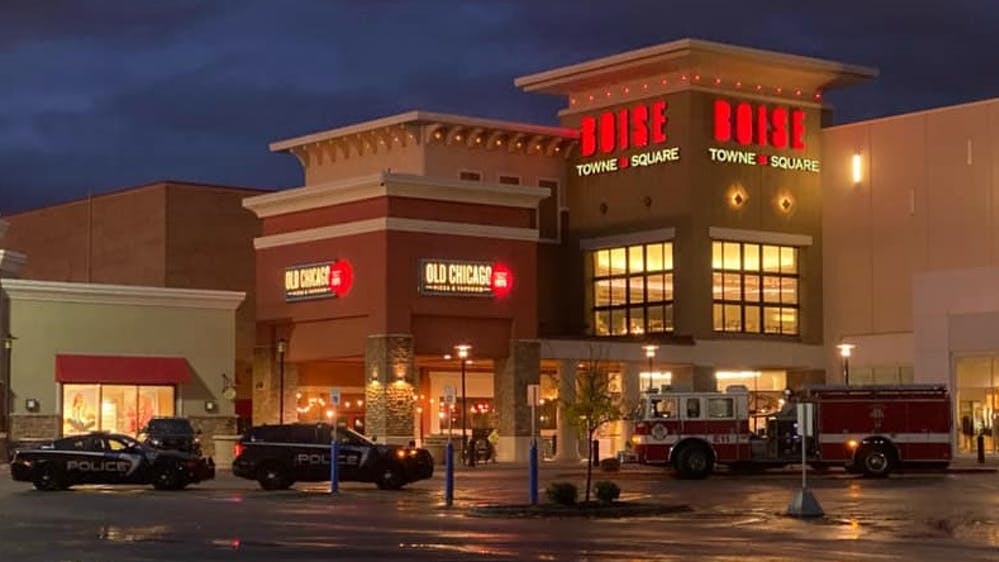 A suspect is in critical condition after he began shooting at a mall and exchanged gunfire with Boise police, killing two people and injuring four others.

Two people were killed and five others injured Monday afternoon in a shooting at the Boise Towne Square mall.

Boise Police Chief Ryan Lee said at a news conference that a Boise police officer and the suspected shooter were among the injured, and stressed that the investigation was ongoing. Lee said the suspect in the shooting is in police custody. Neither the suspect nor any of the victims have been publicly identified.

According to Lee, officers responded to reports of shots fired at the mall on North Milwaukee Street at around 1:50 p.m.

“Shortly after responding on scene, officers encountered an individual matching the suspect’s description, and there was an exchange of gunfire that ensued shortly thereafter, resulting in the officer’s injury, as well as the suspect being taken into custody,” Lee said.

BPD had indicated in a tweet at about 3:30 p.m. that six people, including the police officer, were injured in the shooting. At the press conference, Lee clarified that two of the six had died.

Lee said Boise police were still working to make sure all of the mall’s businesses were cleared and to contact the families of the injured and deceased. He declined to answer questions about the incident, citing the investigation into the officer-involved aspect of it.

The chief also stressed that police believed there was just a single shooter and that there was no ongoing threat.

“I cannot stress enough how traumatic this event is for the community at large, as well as for those that were witnesses, or the families of those involved or involved themselves,” Lee said.

Lee said that “events” related to the shooting took place both inside and outside the mall, but he was not more specific than that.

Boise Mayor Lauren McLean also spoke at the news conference. She extended thanks to first responders and mall employees.

“I want to thank the shopkeepers, the people in the mall that reacted so quickly to take care of folks that were there,” McLean said. “You showed in a tough and chaotic moment how much you care and what you’re willing to do to support and care for strangers.”

Lee said the Ada County Critical Incident Task Force will be investigating the officer-involved part of the case, but Boise police will investigate all other aspects of the shooting.

On Twitter, Gov. Brad Little said, “Those injured in today’s unthinkable shooting at the Boise Towne Square mall are in my prayers. The State of Idaho stands prepared to assist the Boise Police Department as they investigate the shooting.”

Boise resident Diane Green told the Idaho Statesman that she was at the mall to make a quick stop at the Apple Store. She said she was asking a question about her iPad when she heard a “horrible crashing sound.”

“It was like a metal window had blown in and it was echoing throughout the mall,” Green said by phone.

“Most of us there were startled at first, and then right away we heard five to six gunshots, just pow pow pow, extremely loud.”

Green said Apple then followed protocol and had everyone enter the back storeroom.

“That is the worst moment, I think,” she said. “The not knowing.”

She said she was in there for about two hours. “It seemed like it went on forever,” Green said. “It was exhausting. (But) I felt reassured by everyone there.”

Joey Bernal, of Caldwell, told the Statesman that he was in the mall’s food court when he heard five to eight shots. He said security then escorted him out at one of the Macy’s entrances, before police had arrived.

Police asked people to stay away from the area, where streets were blocked off Monday afternoon. Milwaukee was closed completely between Franklin and Emerald streets.

The Ada County Coroner’s Office said in a news release Monday that it was responding to the situation and expected to have updates on Tuesday.