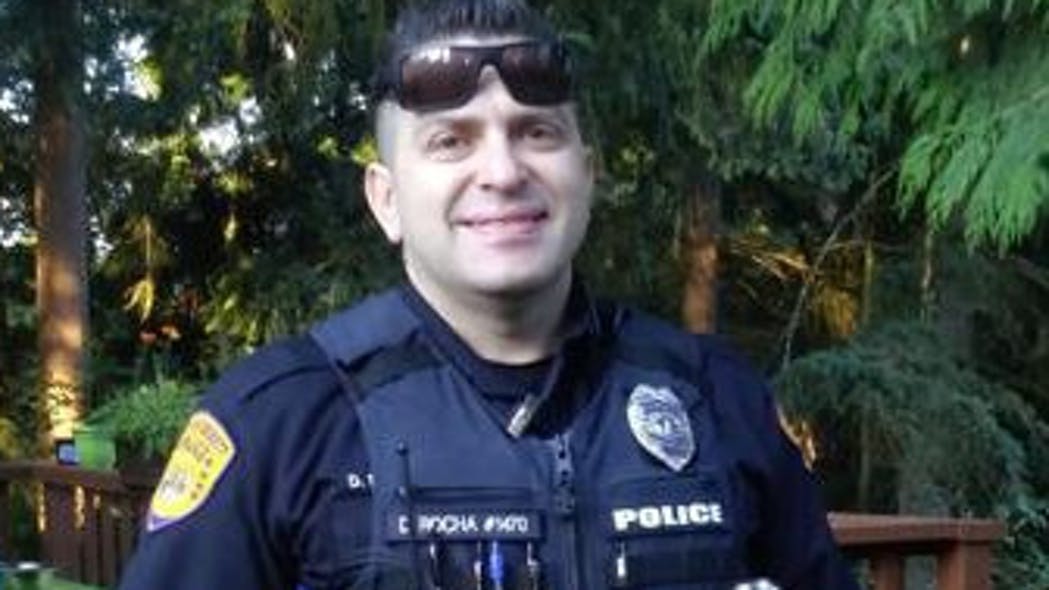 Everett Police Officer Dan Rocha, who had been with the department since 2017, was shot at least two times in the head and then run over while trying to make an arrest in a Starbucks parking lot.

Everett Police Officer Dan Rocha was shot at least twice as he attempted to arrest a 50-year-old man on Friday afternoon and was then run over as the man fled in a blue Mini Cooper, according to a probable-cause statement outlining the investigation into the officer’s line-of-duty death.

The man suspected of killing Rocha, 41, was taken into custody approximately 14 minutes later, after running red lights, crashing into other vehicles and rolling his car at 35th Street and Rucker Avenue, the statement says.

A Snohomish County judge on Monday found probable cause to hold Richard Rotter on investigation of first-degree murder and second-degree unlawful possession of a firearm and set bail at $5 million, according to the prosecutor’s office.

Rotter’s last known address is in Kennewick, Benton County, and court records show he has prior felony convictions in Benton and Franklin counties. At the time of his arrest, he was wanted on two misdemeanor warrants for a domestic-violence assault on Dec. 7 and a hit-and-run in July out of Benton County and was the subject of an officer safety alert issued by Kennewick police, according to the probable-cause statement.

At 2:04 p.m. Friday, Rocha radioed a dispatcher that he was contacting a man in a Starbucks parking lot at 1010 N. Broadway Ave., who he had witnessed moving guns between cars, the statement says. Eight minutes later, several people called 9-1-1 and reported that someone had “shot a cop,” driven over the officer’s body and fled the scene, it says.

Investigators obtained a cellphone video shot by a witness that showed Rocha attempting to detain a man near the back of a Mini Cooper. The man wrestled with Rocha and, as both fell to the pavement, the man was seen drawing a handgun and firing it at least twice at Rocha’s head, says the probable-cause statement. The person recording the encounter then dropped the camera and the video ended.

A second witness video shows a Mini Cooper accelerate in reverse, over the officer’s body, then accelerate forward and out of the parking lot, the statement says.

At 2:15 p.m., Everett police located the Mini Cooper, which was seen “blowing lights” before losing two tires and its bumper before colliding with other vehicles and rolling over at 35th and Rucker, according to the statement. The crash occurred approximately three miles south of the shooting scene.

The Mini Cooper’s driver was detained and taken to the hospital complaining of leg and hip pain but was cleared by medical staff at 5:28 p.m., the statement says. He was interviewed and arrested by detectives with the Snohomish County Sheriff’s Major Crimes Unit before being booked into jail, it says.

Rocha had served with the Everett Police Department since 2017, the department said in a statement. He first worked in parking enforcement and in 2018 became a fully commissioned police officer.

The official memorial fund to support Rocha’s family was announced by the Everett Police Department in a news release Sunday.

Donations to the fund can be made online, or in person at all branches of Coastal Community Bank, with checks payable to VSS-Dan Rocha Memorial. The city of Everett also will accept checks or cash donations at the clerk’s office at 2930 Wetmore Ave., Suite 1-A, Everett, WA 98201.

Visit The Seattle Times at www.seattletimes.com