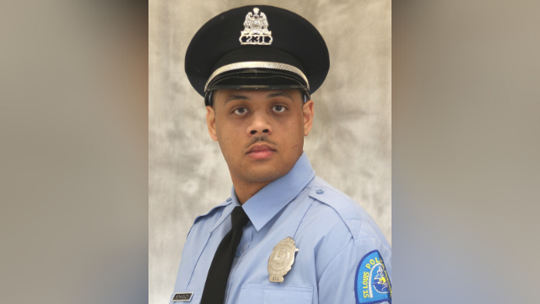 Credit HuffPost: One of the police officers shot Saturday in south St. Louis City while responding to a shooting call has died from his injuries.

Officials with the St. Louis Metropolitan Police Department said Officer Tamarris Bohannon responded to a shooting call Saturday when a man shot him in the head. Bohannon was taken to a hospital and died from his injuries on Sunday.

He was 29 years old and was on the force for three and a half years. He leaves behind a wife and three children.

“It is with the heaviest of hearts that we report that our critically injured officer has died… You will be deeply missed,” the department said on Twitter. “We cannot express how much we appreciate the hospital staff who continuously treated both officers for their injuries.”

Bohannon is the first St. Louis City officer killed in the line of duty since Daryl Hall’s 2011 shooting death.

St. Louis Police Chief John Hayden said Bohannon and other officers were responding to a shooting call in the 3700 block of Hartford Street shortly before 6 p.m. Saturday just south of Tower Grove Park. While they were looking for a victim, they heard gunfire and Bohannon was hit in the head and went to the ground.

The gunman shot a second officer in the leg when he and others were going to assist Bohannon. The officer, who is 30 years old, was taken to a hospital and later released on Sunday.

“These officers, all they’re trying to do is their job and try to help a person who’s wounded and they come under fire themselves,” Hayden said.

Hayden said the suspect ordered homeowners Steve and Mimi Haag out of their home and barricaded himself inside.

“I’m looking at my husband and I’m seeing this man … I didn’t look at his hand but I saw something dark in his hand and he said, ‘Ma’am, hang up your phone,” said Steve’s wife Mimi Haag. “I can’t believe this happened and that we walked out of that house without that man shooting us … standing their in our foyer with his gun.”

Investigators were able to take the 43-year-old gunman into custody around 4:45 a.m. Sunday.

“Our officers have been going through a lot this summer,” Hayden said to reporters outside St. Louis University Hospital. “We’ve had a surge in violence.”

Hayden said eight officers have been shot in the line of duty since early June in the city.

What we know about the suspect

Sources told us 43-year-old Thomas Kinworthy has  a lengthy criminal history, including a conviction in 2001 for aggravated battery with a firearm out of Florida.

He is currently facing charges of sexual battery and kidnapping for an incident in Florida last year, according to sources. He’s been out on bond but a warrant had been issued for his arrest for failing to appear to court in that case.

He has also had other traffic and drug convictions out of Missouri.

“Teresa and I are deeply saddened to hear of the loss of one of our SLMPD Officers,” Gov. Mike Parson said on Twitter. “Officers across Missouri protect us every day without hesitation and they and their families deserve our support.”

St. Louis Mayor Lyda Krewson said she is heartbroken over the officer’s deaths.

“This is a horrific reminder of the dangers our brave men and women willingly face everyday to keep us safe,” Krewson said. “I ask that everyone please continue to keep Officer Bohannon, his loved ones, friends and colleagues, and the entire St. Louis Metropolitan Police Department in your thoughts and prayers.”

The U.S. attorney for the Eastern District of Missouri Jeff Jensen said his team is aware of the shooting and is available to assist.

“We offer thoughts and prayers to the officers and their families. I, along with the men and women of this office, stand ready to help local law enforcement if needed,” Jensen said.

The shooting happened the same day widow of retired Police Captain David Dorn led a march in the city calling for peace and healing. Dorn was shot and left to die outside a pawn shop early June by violent looters.

Friend on Wash. Officer Killed in Crash: ‘He Cared about Everyone’