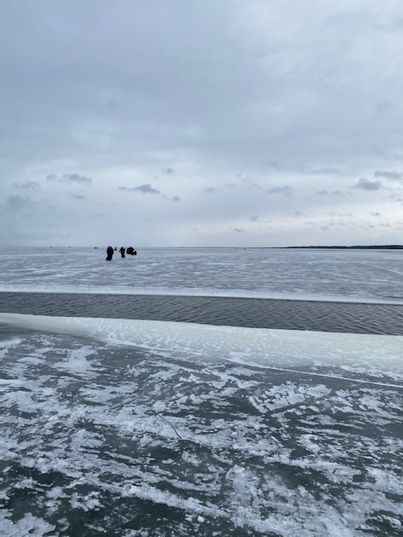 Beltrami County sheriff’s deputies and other first responders built a temporary bridge to evacuate fishermen and others stranded on a “large chunk of ice” that broke loose from a lake’s shoreline.

About 200 people were trapped on a “large chunk of ice” when it broke free from the shoreline of a Minnesota lake, authorities said.

One of the people stranded on Upper Red Lake called 9-1-1, saying about 100 people were fishing when the ice chunk broke away, according to a Nov. 28 news release from the Beltrami County Sheriff’s Office.

Deputies and other first responders headed to the lake at about 11:30 a.m., where they “discovered a large portion of the ice with up to 30 yards of open water stranding the fishermen,” authorities said.

Water rescue agencies were called to the lake to assess the situation, the sheriff’s office said, and they found “a narrow spot of separation” between a piece of the ice chunk and the shoreline.

At that point, they set up a temporary bridge to evacuate those who were stuck.

“Due to the urgent nature of getting people off the ice and the likelihood that several groups were unaware of the separation,” authorities said they issued a “Wireless Emergency Alert,” which sends cell phone notifications to those in the area. It provided GPS coordinates of where people could get help to evacuate.

About three hours later, the sheriff’s office determined the rescue was complete. About 200 people were evacuated, according to the release.

“The Beltrami County Sheriff’s Office reminds those who are thinking of heading on the ice that early season ice is very unpredictable,” authorities said. “Extreme caution should be used when heading on the ice and to check the thickness frequently to ensure an adequate amount of ice.”