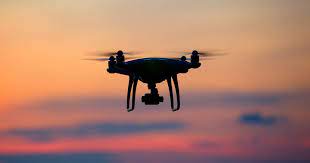 “We can cover so much area with a drone that would take a really long time with cops on foot, especially at night,’ said a Hartford police spokesman about the department’s new drone program.

Hartford police have begun using drones to track four-wheelers, dirt bikes and stolen cars, and assist with other situations like missing person’s cases and crowd control for large events.

The new, grant-funded drone program officially began in August when officers used one of the devices to quickly sweep Keney Park for a missing 8-year-old, a job that would otherwise have taken 20 officers, Police Chief Jason Thody said during a news conference Wednesday. In a matter of minutes, drone footage covered the entire park, confirming there was no sign of the child, who was soon located elsewhere.

“We can cover so much area with a drone that would take a really long time with cops on foot, especially at night — putting cops in areas with flashlights out in the woods,” said Sgt. Chris Mastrioanni, who leads the department’s drone program. “A drone can really take the place of that and do it really quickly and efficiently.”

The program, which follows FAA, state and local regulations, is nearly four years in the making.

It was November 2017 when the department announced it would start using drones to covertly follow suspects’ vehicles, and drivers operating illegal ATVs, dirt bikes and quads, rather than engaging in high-speed chases.

The department bought the devices as part of a broader expansion of its surveillance program, which at the time boasted a network of more than 700 cameras throughout the city. The new technology, including computer software and 200 additional cameras, was backed by $2.5 million in state funds.

The department had up to $100,000 to spend on the drone program and its continued operation, according to Mastrioanni. He did not say how much of that has been spent.

State Sen. John Fonfara, a Democrat who represents Hartford and Wethersfield, helped secure the funding for Hartford police. He was among those who suggested the police department use drones to address the growing danger of illegal, off-road vehicles in Hartford parks and neighborhoods.

The drivers, mostly from out of town, would take off whenever police tried to pull them over. And officers couldn’t chase them without endangering other drivers and pedestrians.

However, a drone could provide a vantage point 400 feet in the air from which to follow the vehicles, allowing police to apprehend them in a safe location, Thody said.

“It was a kind of an out of the box way of dealing with a problem that we really didn’t have a good answer to,” he said. “We know we don’t want to be out there pursuing these vehicles, but we have to have a way to track them and this was a great idea.”

The department consulted with the Federal Aviation Administration and other police agencies to design its program and provided officers with a six-week training program ahead of their pilot’s exams.

Mastrioanni is now one of four Hartford officers certified by the FAA to pilot the department’s 10 drones, which includes one all-weather device that can be flown in snow and rain.

Since launching the program in August, the department has successfully tracked one stolen vehicle, Mastrioanni said. Officers arrested the occupants, who had been committing robberies all across the state, and seized one fake firearm, he said.

Drones have also been deployed in response to burglaries to quickly determine whether a suspect is on the roof of a building, Mastrioanni said. They make quick work of scanning large areas, like the Connecticut River, for missing people.

On Saturday, the department will use them to monitor traffic during the Hartford Marathon.

While the devices can be used in a variety of situations, regular patrols are not one of them, Thody said. They are only used for specific events and incidents, and the purpose of each flight is recorded with the FAA, along with detailed information about the drone’s flight.

The footage captured is also available to the public under the Freedom of Information Act, Mastrioanni said.

Thr Hartford City Council has considered enacting a policy to further regulate the department’s drone use.

Michtom said Wednesday he wants a city policy to clarify when it is appropriate for police to use their drones and what happens to the footage they capture. He said he’s asked for the police department’s policy but has not seen it yet.